Inside The Designer’s Studio: Jennifer Hillman-Magnuson

Meet Jennifer Hillman-Magnuson, author, mother and “peanut butter smuggler” who with her family, resides full-time in the beautiful state of Oregon. This wasn’t always the case. As an accomplished writer who began her journey with the likes of Nickelodeon, Jen’s creativity flows in her imaginative writing style and memoirs that are wildly entertaining. 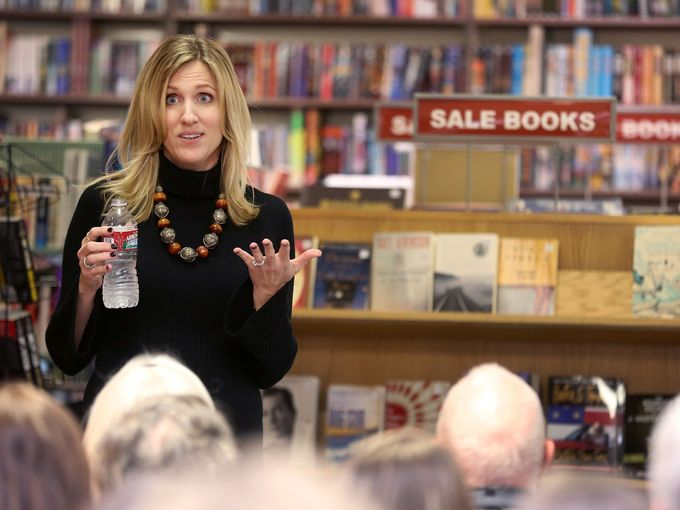 WTF is a “peanut butter smuggler”? I hear you say. Well, fly-by-the-seat-of-her-pants mom, Jennifer Hillman-Magnuson happens to be the author of the hilarious book, “Peanut Butter and Naan: Stories of an American Mom In The Far East”, a memoir that documents the real-life challenge of moving a family of seven from cozy Nashville, Tennessee to Chennai, India. Knowing that her family’s favorite snack might not be readily available in Chennai, Jen packed her bags with enough jars of PB&J to last weeks–a move that TSA likely had some questions about.

The process of documenting her life abroad became a reliable means for Jen to communicate with the family and friends that she left behind in the west. In a place where electricity supply is inadequate at best, the telephone and internet were a thing of luxury. After being persuaded to turn her journals into a permanent record, Jen shared her experience of embracing exotic culture while keeping a piece of Uncle Sam alive for her kids. From rubbing shoulders with Nashville’s music elite to a fully non-rock-and-roll experience in the depths of India, Jen’s memoir is a candid window into what an all-round American mom could expect to find in the far east.

With a reference to the 2014 science fiction action film Lucy, Nigel reveals that movies provide a necessary escapism for the hard working mother and acclaimed author. Even a writer needs an outlet every once-in-a-while. Although verbal story telling provides much of her modern entertainment, Jen’s foundation in journaling laid the groundwork for her imaginative storytelling abilities.

Journaling to create lasting memories is one thing, but writing and eventually publishing an award winning book is quite another. With the success of “Peanut Butter and Naan…” behind her, Jen is excited to reveal her latest book: “Wither – Acute Stories of Shame and Other Embarrassments”  in which she catalogs the sometimes uncomfortable descent of mortified individuals into a fiery pit of face-burning embarrassment. The book pays homage to the brave souls who shared their jaw-dropping stories with the public.

And, as if her world wasn’t busy enough, can you guess what Jen would be if she wasn’t a writer? Here’s a hint: Egon Ronay vs. 007 would be a fitting title.

Inside the Designer’s Studio: Pat Hazell 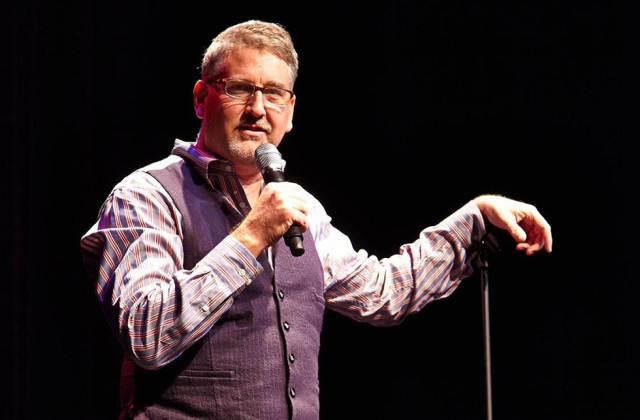 Meet Pat Hazell, chief creative officer at Sweetwood Creative in Austin, Texas. One of the original writers for NBC’s Seinfeld, Pat is a Tonight Show veteran, and a critically acclaimed playwright. And, lucky us, Pat is also a creative director with whom we have the pleasure of working on both client projects and internal Designing North Studios uber creative projects as well. In fact, he is the co-creator of our annual event, Knight of the Roundtables.

Nigel tried to pry some guilty pleasure secrets from Pat during his podcast interview, but it appears that Pat is really and truly, as Nigel puts it, a good egg. As a child magician, Pat loved the creativity that he could infuse into his acts, learning what worked and what didn’t as he attempted to engage and enthrall his audience.

He sees every act of creativity as an act of courage – a campaign to fill the space while simultaneously adding value. His greatest challenge in the creative process, whether it’s writing for stand-up comedy, crafting a script, or penning a new score, is finding a quiet space outside of his shower – or as he calls it, going into a Russian sub and closing myself off. He’s currently seeking that solitude to put the finishing touches on his musical Grounded for Life, a farce about being stuck.

Pat’s favorite and least favorite words? You’ll have to listen to find out. Spoiler alert, there’s a hint to one of those answers in this text.

Creative Inspiration – Something to Chew On 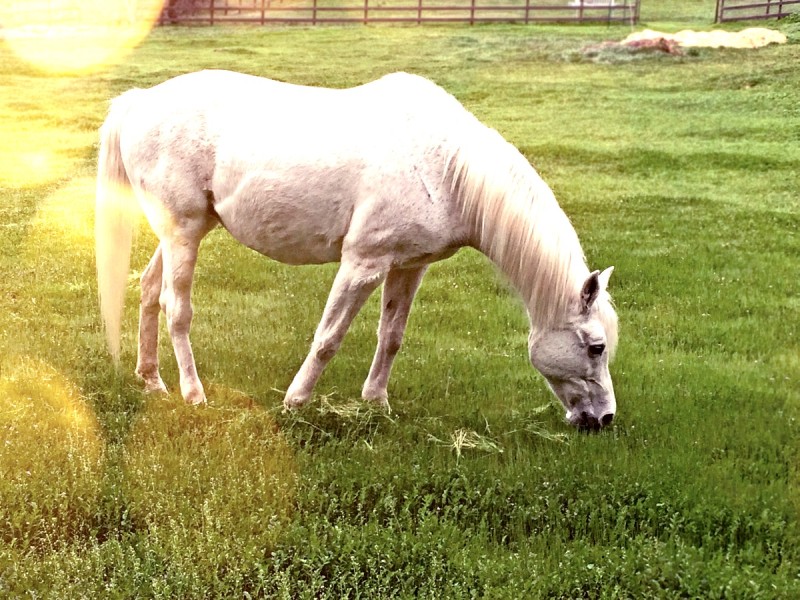 This is an extraordinary time to be a creative person. To survive as an artist in the Middle Ages or during the Renaissance, you needed to have a sponsor, a patron – perhaps a pope, a Medici, or a Holy Roman Emperor. Today, photographers hawk their compositions on any number of stock photography websites; writers can create their own blogs for a fistful of dollars, augmenting their income with freelance posts; and digital designers can create clever website designs as independent contractors. A creative type can effectively create his or her own marketplace. 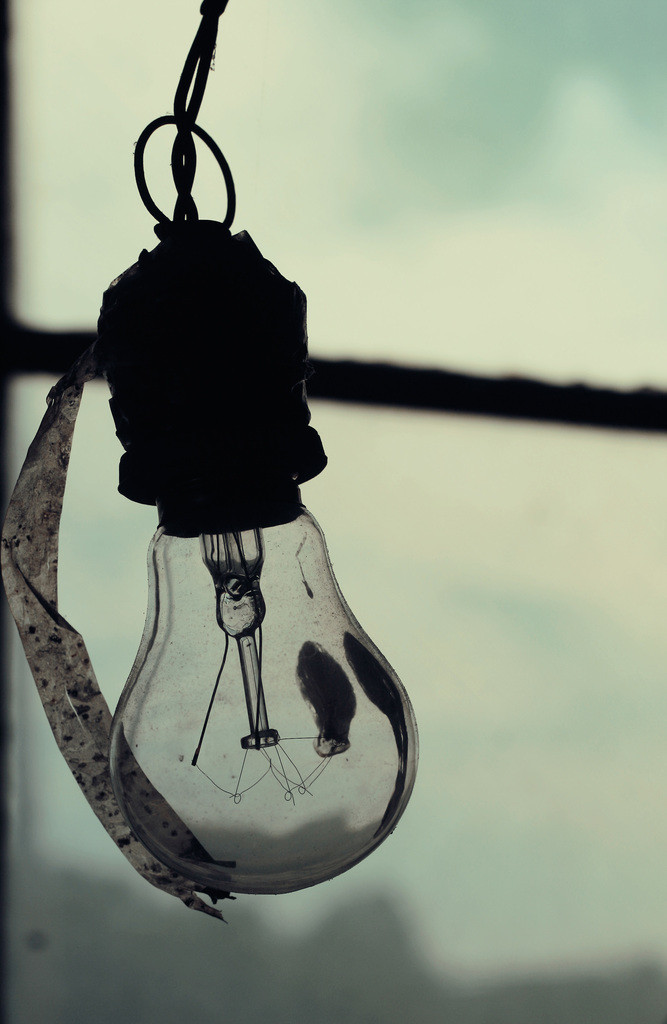 Yet the strain to satisfy the insatiable beasts that are content marketing and competitive creativity can sometimes be overwhelming. The Information Age is just that: an age that is exploding with information. At times the glut of information bombarding one’s senses either drives the creative person into an entirely catatonic state or catapults him or her into a state of utter pandemonium – numb or crazed – take your pick. Either way, creative output is essentially paralyzed.

All of us sometimes become trapped in creative morass, so we thought we would share some of our favorite ways to break free and get into the creative zone.

We’d love to hear what yours are too.

How about you? What gets your creative juices flowing? Tell us!

Sleigh bells ring, are you listenin’?

Okay so sleigh bells don’t exactly ring in the Bay Area, but our holiday spirit is alive and well nonetheless. We’ve curated a list of eight fonts that represent the fun, the frivolity, and the tradition of the holiday season. The best part? They’re all free for personal or non-profit use! For commercial use, you’ll need to purchase a license.

Drum roll please… Here are eight fantastic fonts to use in your holiday eNewsletters and greetings. 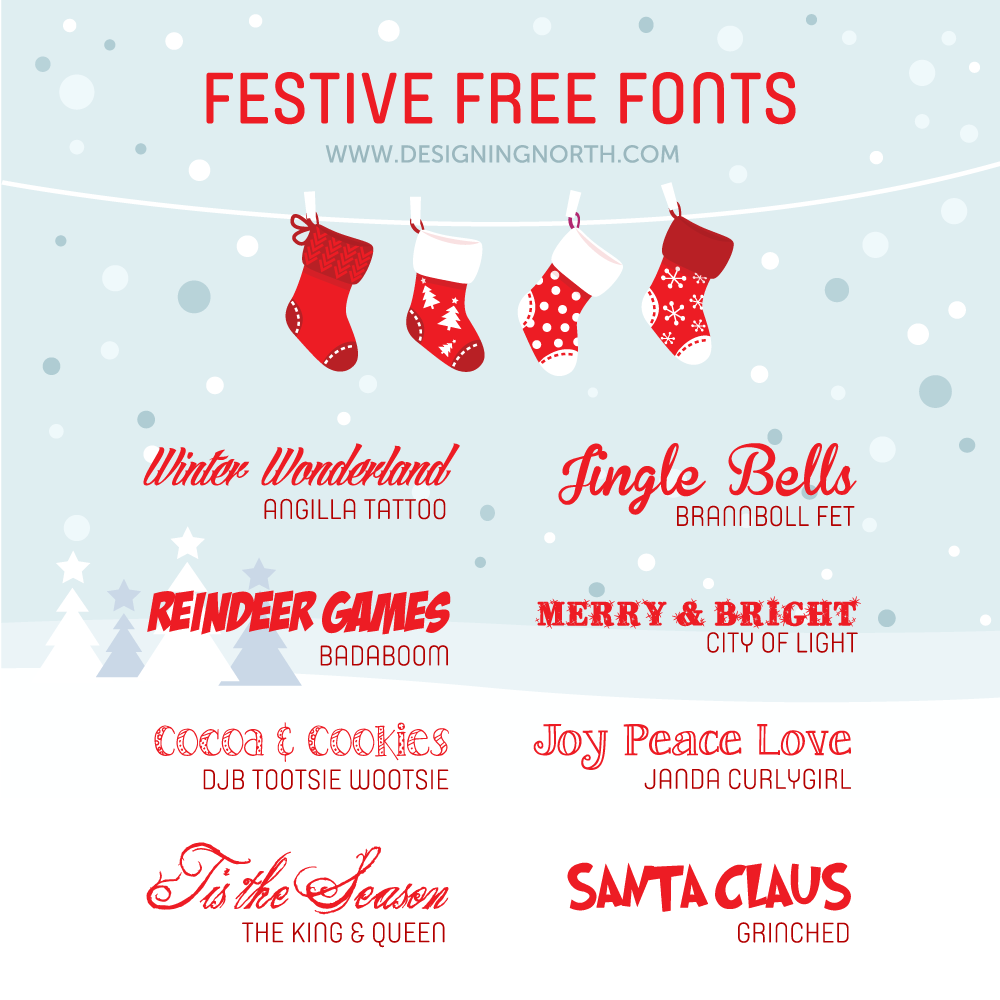 Subscribing to all our storytelling yet? 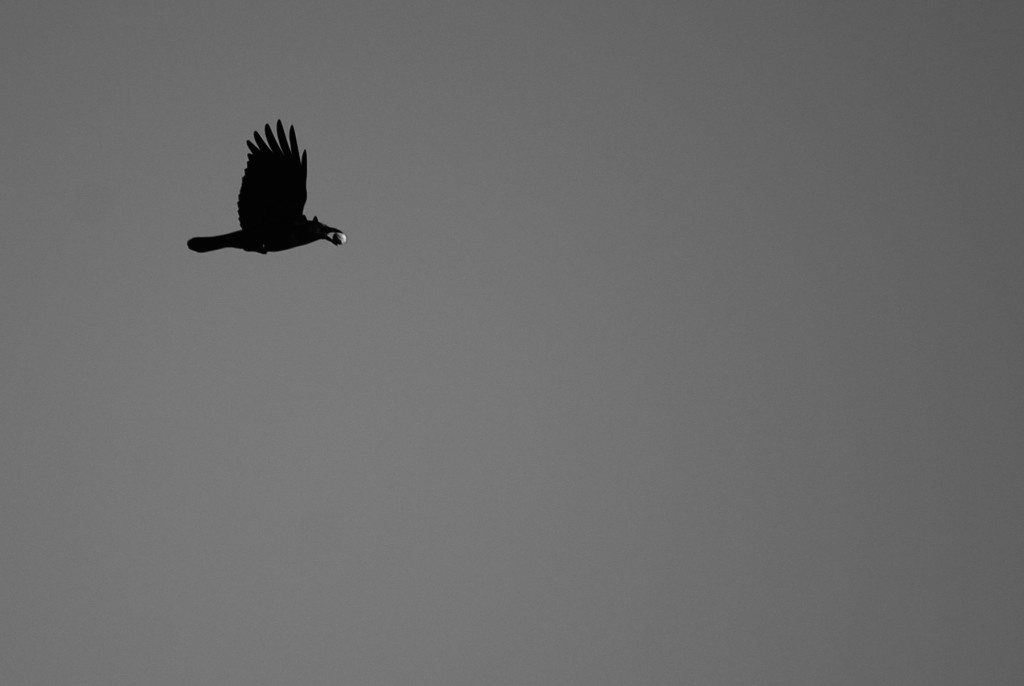 What do crows have to do with design strategy? One could easily argue that crows are rarely cast in a positive light. Think of the phrases associated with the ebony fowl: You old crow; Cackling like a bunch of crows; Eat crow; and for us women, the dreaded Crow’s feet. I mean really – we call a flock of them a murder of crows. These guys have a serious PR problem, so why the metaphor?

I live in the country and work from my home office, so much of my thinking is influenced by the outdoors. As I walked my dogs early Halloween morning, I was once again struck by the annual highway located 50 feet above my head. Our property lies about a half-mile (quite literally as the crow flies) from a walnut orchard. Each autumn, the crows mount an industrious effort to harvest said orchard.

Over the years, I’ve come to realize that the tufty endeavor is in fact a highly organized and strategic operation. Beginning at dawn, a squadron of the first airborne descends on the farm. Each pilot grabs a ripe walnut that has dropped to the ground, then begins the long flight to base station. They fly in two lanes on two separate highways. The outbound crows carry their full payload, while the inbound crows have already stored their assets at base station. Free of walnuts, the inbounders cackle encouragement at the burdened outbounders.

Squadron leaders intermittently accompany the outbound crows. They do not carry nuts, but instead coach the neophytes along their flight path. I like to imagine that they are offering suggestions for course adjustment and flight refinement. By late morning, work has ceased save for a few crows on maintenance duty.

Beyond their remarkable coordination, the crows have developed an ingenious method of cracking their walnuts. When we first moved to the sticks, I pitied the crows that accidentally dropped their walnuts on the pavement as I drove down lonely country roads. After another neighbor complained about the walnut shells and crow feces on his tennis court, it occurred to me that none of this was accidental. The crows deliberately drop the walnuts on hard surfaces to crack them. If they don’t break the first time, they shovel them back into their beaks, fly a little higher, and drop their bombs again. It certainly saves some serious headaches from incessantly pounding your beak against the near impervious shells. 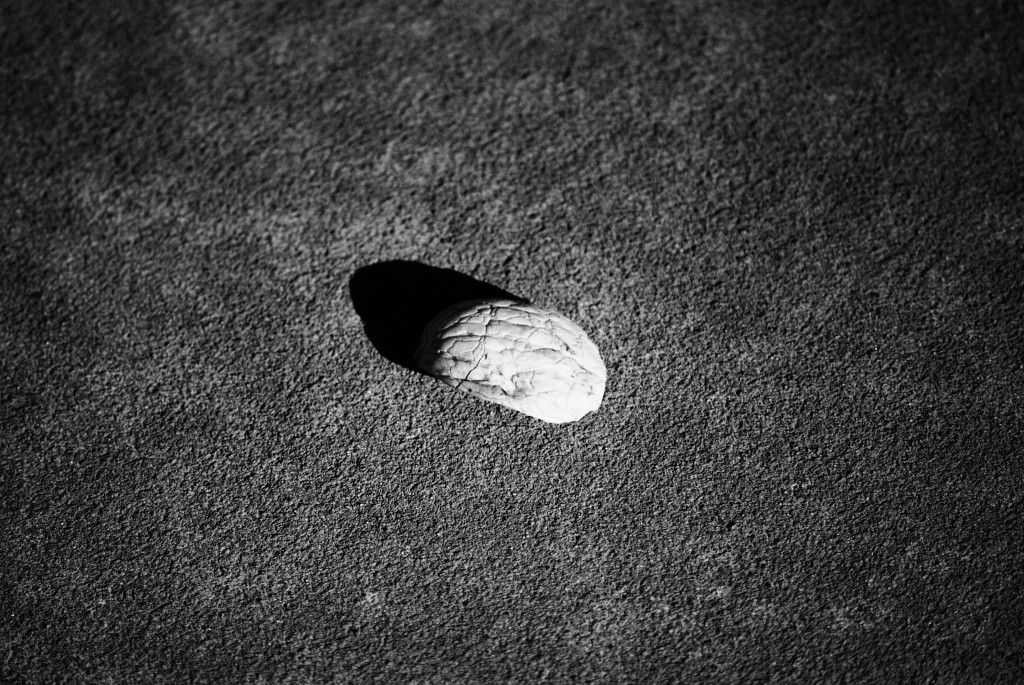 Despite their bad rap, we can learn a lot from our feathered friends with respect to good design practice. There’s no question that they have studied the problem of how to efficiently transport their winter food source from Point A to Point B. They’ve developed effective processes for their airborne armada. Each soldier knows his role and the mission of the team. Practical feedback and encouragement is given by team leaders. And finally, through what was likely an iterative process, they arrived at a creative solution for cracking the nut.

As Henry Wadsworth Longfellow once said, Method is more important than strength, when you wish to control your enemies. By dropping golden beads near a snake, a crow once managed to have a passer-by kill the snake for the beads.

While we are not the largest digital design studio in California, like the crows, we do employ proven methods such as discovery and research, iterative processes, creative solutions and innovative approaches through re-imagining experiences to help our clients shrewdly rise above their competition and cleverly crack the nut.

What about you? Had an natural epiphanies lately?