A Designing North Star’s User Story: As a Triumph Owner, I Want to Customize a Bike Into a Cafe Racer for the Distinguished Gentleman’s Ride

As a boy growing up in the 60’s, the vision of leather-clad bikers whose only nod to safety was an apparent paper machè helmet, pushing their bikes to seemingly interstellar limits filled me with intrigue and abject terror. I never found the grease and dirt of the ‘Rockers’ to be that appealing. In fact, I was more attracted to the clean-cut ‘Mods,’ but motorcycles in all of their stripped bare glory were the things of wonder. I marveled at the riders’ willingness to take a perfectly fine Triumph Trophy and pull bits off of it in a quest to drop weight. I was in awe of their nonchalant chopping, welding, and improvising to achieve that ‘ton-up’ machine.

However, I was too young, too broke, and too scared that I’d indelibly change the motorcycle to get beyond a dream.

The term “Ton-Up Boy” may have been lost to the ages. It defined a rank assigned to young men who straddled stripped down, borderline Burlesque British bikes and hurtled themselves towards (and often beyond) the magic 100 mph through the streets of London. Blurred streaks of black leather, dripping grease and belching smoke in a race from the Ace Cafe to the to Hanger Lane roundabout and back–to a plate of egg and chips. 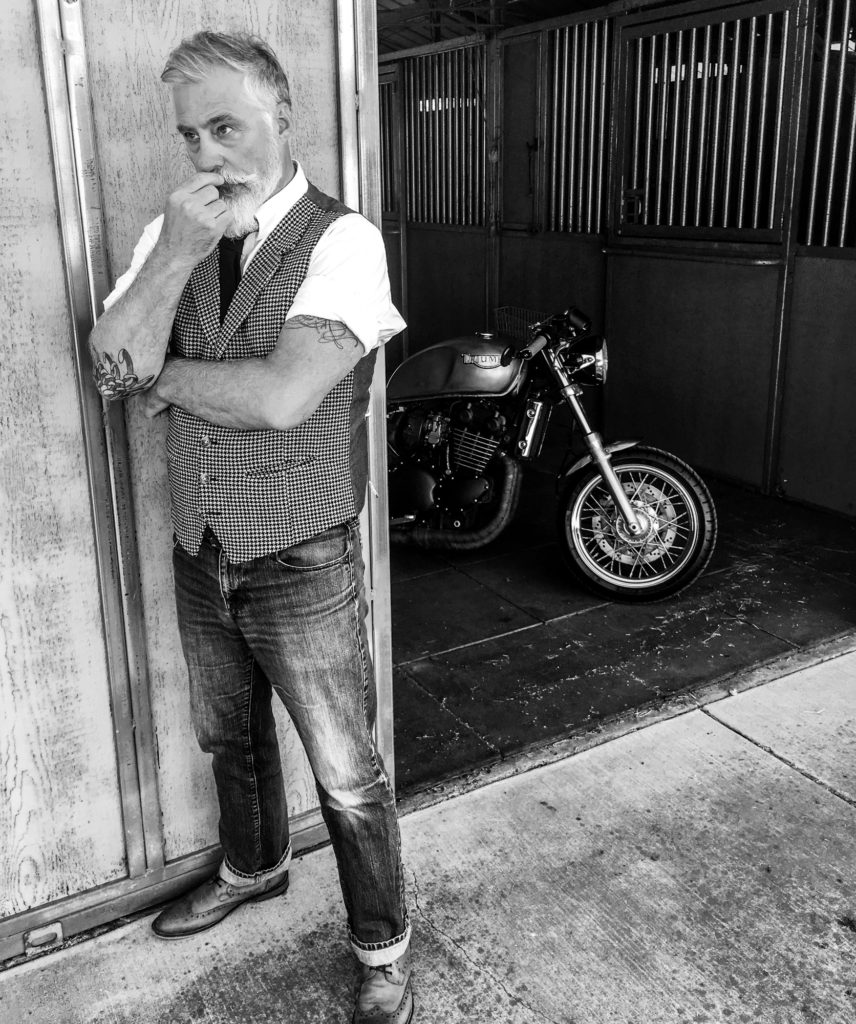 Skip forward many years of owning and riding motorcycles, acquiring mechanical and technical knowledge that could at least get me started from the side of the road (pending inevitable failure), and my thoughts returned to the ‘Ton-Up’ dream. Obviously achieving the magical “ton” nowadays is less of an accomplishment than putting your underwear on correctly, but locating a motorcycle that resembled the “ton up” machines of my youth provided a happy challenge. And building one was, to me at least, the final act after years spent gluing plastic model kits together.

I spent some months scouring the internet for information on building a Cafe Racer. There’s a lot of info, I mean shit loads, and determining the best advice whether it was written by Jethro the hammer wielding yokel or Slick Jimmy’s Custom Foot Peg Emporium was a significant task. Companies like Ryca Motors sell awesome kits for you to quickly create your dream Cafe Racer but I wasn’t ready for anything remotely as professional just yet. I eventually pulled enough information together to create a vision of my project bike and how I might achieve it.

Fortune came my way via my good friend Rey Sotelo of Hollister Power Sports. I purchased an Indian Chief Vintage from Rey a few years back and never regretted the decision. Rey knew I was in the market for a donor bike and offered me a deal on older Triumph Legend TT, which had been received on a trade-in. A sit-up-and-beg cruiser wasn’t the most obvious donor choice for my cafe racer project but it was cheap so it meant that I didn’t care if my hammering, slashing and slobbering screwed the bike into oblivion. At a minimum I would gain some experience and most importantly, confidence.

So without a blueprint, clear project plan, or 50% of the tools I needed, I set about transforming a 1999 Triumph Cruiser into a rat-stripped Cafe Racer for my own sheer indulgence and pleasure. 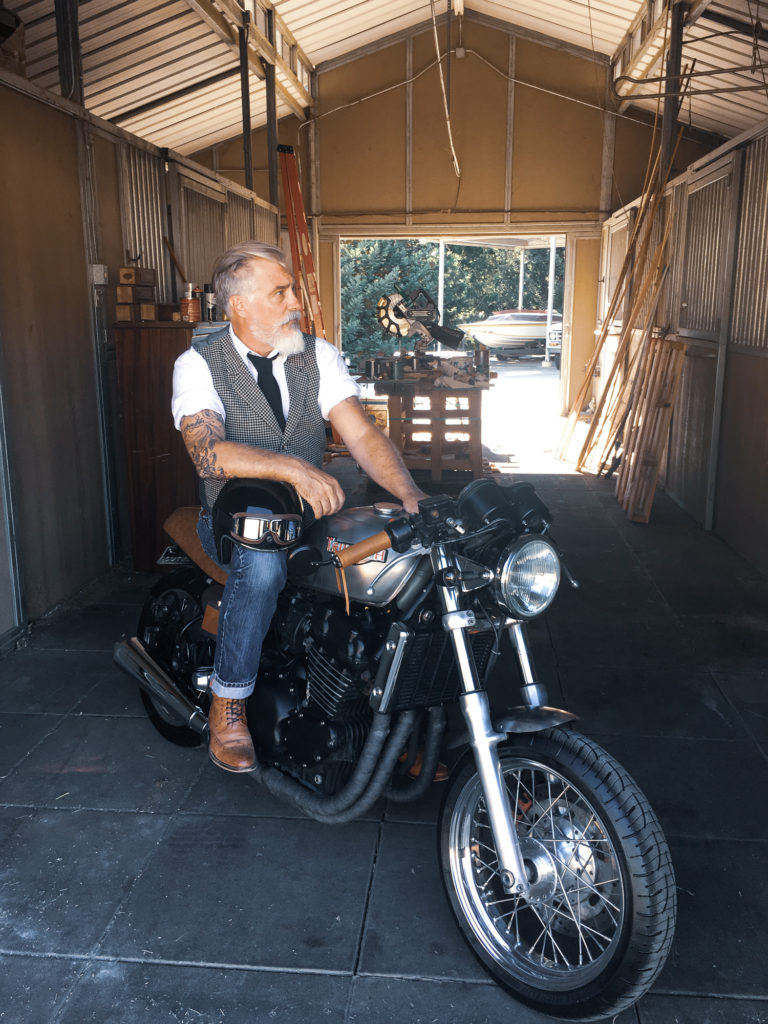 Not only did the internet (kudos to Jethro) provide great project information, but without it I would never have been able to find the parts and equipment I needed for the build (what the hell did we do before Tim Berners Lee?). I am still blown away that I can lounge on the sofa and surf a catalog of parts from 2WheelPros.com or find assembly diagrams at Pandoras, hit a button and a friendly delivery service drops the bits at my door. Without companies like Texavina who not only hand made my new saddle but most importantly had the originally seat pan models to ensure a ‘true’ fit, I would have been screwed.

Skip forward again a few months and while I don’t think the bike will ever truly be finished, I do have a working manifestation of the vision I set out to achieve. It’s never going to be a concours d’elegance entry (even for my pre-industrial revolution eye it’s a bit rough around the edges), but it’s a rideable accomplishment that I would sooner massage my nether regions with a cheese grater than wind it up to the magic ton, but it runs and looks good enough and I did it on my own. Now what? 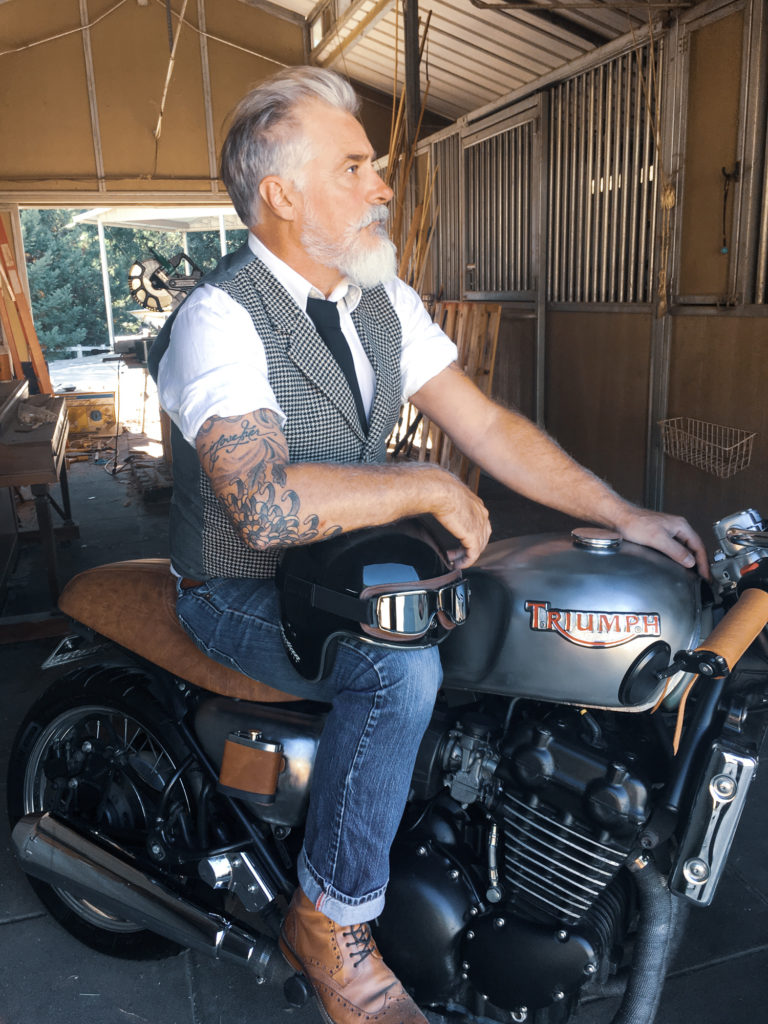 Prostate cancer is the second most commonly diagnosed cancer in men. And The Movember Foundation is the largest funder of prostate cancer programs in the world. Additionally, prostate cancer only affects men, as women do not have a prostate gland. Risk factors in developing the disease include:

Age: The older a man, the more likely he is to be diagnosed with prostate cancer. If you’re 50 or over, chat with your doctor about PSA testing.

Family History : A man with a father or brother who developed prostate cancer is twice as likely to develop the disease. If you’re 45 or over and prostate cancer is in your family, you should strike up the conversation about PSA testing with your doctor.

Ethnicity: Prostate cancer has an increased occurrence in men of African and Afro-Caribbean descent.

For more information on prostate cancer including symptoms, testing, treatment options, and support resources, head over to the ‘men’s health’ section on Movember.com.

3 out of 4 suicides are men. And 510,000 men die from suicide globally each year — That’s one every minute. This has to change.

The causes of suicide are complex. There’s no single reason why men take their own lives, but we do know that by improving overall mental health we can reduce the risk of suicide. We need to address untreated mental health conditions among men.

Too many men are toughing it out and struggling alone. There’s no shame in checking in your own mental wellbeing, and those close to around you. Our friends over at Movember have produced some handy guides that might help take the sting out of broaching the subject. 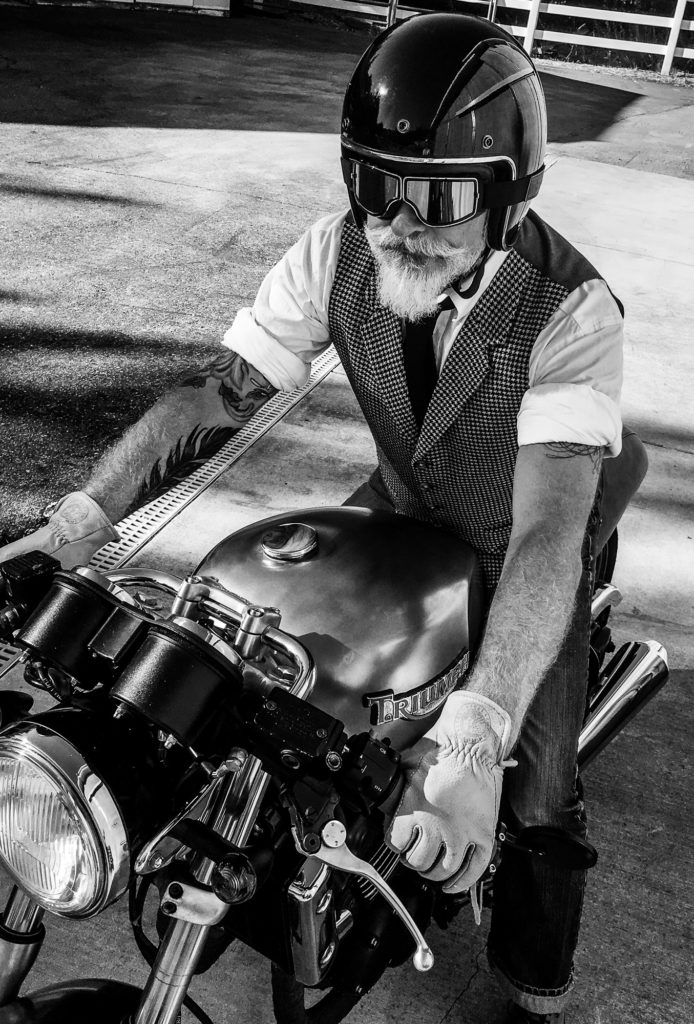 The Goal: Ride my Bike and Make a Difference

Early in 2018 I read about the Distinguished Gentleman’s Ride. A group of “…distinguished gentlefolk in over 650 cities worldwide will don their cravats, tustle their ties, press their tweed, and sit astride their classic and vintage styled motorcycles to raise funds and awareness for men’s health, specifically prostate cancer and men’s mental health.” To date, the Distinguished Gentlemen’s Ride has raised $4.85 million to support these causes while looking good at the same time.

Now I’ll admit that I’ve been a Mumford & Sons fan since first seeing them appear with Bob Dylan and the Avett Brothers at the 2011 Grammy’s, so the perhaps tenuous tie-in between the well-heeled motorcyclists of DGR, the Mumford-esque feel of the event and Marcus Mumford’s own passion for bikes prompted me to actually do something with my new creation (the Cafe Racer). I have almost convinced myself that I built the bike for such an event. It looks like it was made for it. This shabby, half-arsed project might just complete its life by actually doing some good. This wasn’t something I set out to do. Shit, my only intention was to build a rad bike. But in realizing a worthy end to the project it both closes the build and opens a door to give hope for someone, somewhere, to live longer. And I feel damn good about that. I know it’s not the intention, but it feels a little like I’ll be supporting this great cause and simultaneously fulfilling my Cafe-Racer dream while dressed up as Don Draper.

But if you want to show your support for a well intentioned Mumford-biker-wanna-be then please donate here: https://www.gentlemansride.com/rider/NigelPeacock