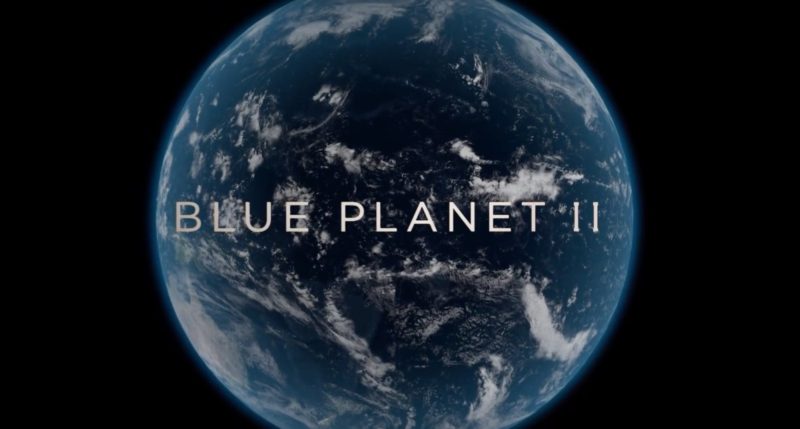 Blue Planet II is expected to be a thrilling journey, and David Attenborough will once again be our tour guide across the ocean.

With over 43 million views on its trailer video in under a month, Planet Blue II is poised to make an impact across the globe, starting with Europe on October 29th.

Us unfortunate ‘blokes’ in the states will have to wait until early 2018 for such pleasure. And the timing couldn’t be better. You see, the world’s oceans are under siege, battling the constant barrage of plastic waste, overfishing, illegal dumping, poaching and dare we say it: climate change. No. It’s not political. (And somewhere in this mix of obstacles we forgot to give a shout-out to climate deniers; or those who simply can’t fathom a world where man’s impact on the planet is influential enough to cause great harm and destruction.) We are confident that this ground-breaking series will extend a welcoming hand to those who are still shying away from fact: ocean plastic will soon outnumber fish populations.

Why is Blue planet II an important documentary for everyone to watch? Because the impact that climate change is having on the ocean environment is staggering; its importance as a discussion point among the human race deserves attention. And most importantly, the health of the ocean is a direct correlation to the health of our human population, and therefore our ability to thrive on the face of this Earth. It’s time to think about your children and your children’s children.

Who better to pioneer this discussion than the unmistakable voice behind the Blue Planet (and Planet Earth) series, David Attenborough. With David’s voice, Blue Planet II will highlight the threats to our magnificent ocean as much as it will showcase the marine life that makes it so unique and awe-inspiring. David Attenborough is far more than just an interesting voice; he is an influencer for ocean activism and conservation, and has been from a young age. But with the ocean environment in a state of emergency, it’s his research and experiences that can have a positive impact on how others can learn and adjust their mindset to create change. Fiona Harvey points out in her article with The Guardian, Attenborough feels more free to speak out about controversial issues surrounding the challenges we face as a booming population. In other words, Blue Planet II won’t shy away from tough conversations; it will tell the world what’s really going on, not what the media feels is “safe” to talk about.

Additionally, we look forward to listening to a man who hasn’t just talked-the-talk, but one who has walked-the-walk. An integral part of Cambridge University, he is leading an effort to integrate many academic disciplines in the name of collaboration and cross-pollination of thoughts and ideas. It’s an attempt to break down barriers, be a catalyst for rapid change and as we at Designing North Studios like to see it, an effort to design a community that’s willing to do a little extra in the name of the ocean. Or rather, our ocean. As Fiona Harvey writes, “Viewing conservation as part of the whole future of humanity, rather than a thing apart, is one of Attenborough’s great legacies.”

Blue Planet II is not a show, it’s an immersive experience. And it’s all new.

The original Blue Planet (aired on September 12, 2001) was a memorable experience for many that introduced the world to the ocean landscape. Not just a show or series for quick entertainment, Blue Planet was a different experience that transcended the coziness of a living room to the bow of a research vessel, and dared people to think beyond their existence with a curiosity towards ‘what else is out there’ in this great big blue ocean-world of ours. Centric to an ocean that plays an integral role in every humans’ life (70% of the Earth’s surface), Blue Planet was addicting to learn from. It was adventurous. It was fun. It was the ultimate opportunity to “explore” places where most humans can’t go. In a rare occasion for television, this documentary considered more than the crew or script, it put you at the center of its storyline, and guided us through a journey on the seas — it offered the ultimate viewer experience for the time. And because of this, we recognize those feelings and emotions of excitement felt many years ago, ready to do it all over again. With our tanks prepped and full of oxygen, we are eager to dive back in with Blue Planet II.

Many of us still own the complete DVD-set, which we keep as a reminder of just how mesmerizing this ocean journey was to watch. One that influenced viewers of all ages to care more about the ocean after watching than they did prior to tuning in. At the time (2001), Blue Planet revolutionized the way humans experienced a nature documentary. Not only was it filmed with cutting edge technology, but it also crafted a story from the wild places that exist in the world’s oceans and the plethora of creatures that call it home. By simply following along with the now infamous David Attenborough (the curious yet confident voice narrating what seemed like a personal expedition across the ocean), we as viewers learned more about the ocean than we could have imagined. But even more important to this learning experience, we were able to see it all with our own eyes. And now, in 2017, Blue Planet II will “enter new worlds and shine a light on behaviours in ways that were impossible just a generation ago” as Mr. Attenborough puts it.

It’s one thing to hear or read about the changes taking place in the ocean environment, it’s another to see it: the many islands, archipelagos, coastlines, trenches etc., all captured with stunning detail thanks to modern science and technology, and delivered to our devices in seven episodes. For many people, a documentary such as Blue Planet II is the bay-window into a world they wouldn’t otherwise be exposed to. And during this current time period, we all need to try and see things a little more clearly; understand what’s ‘really’ going on out there in the “great big blue.” After all, you don’t have to believe in science to accept the fact that this planet is in fact primarily ocean. Good enough reason to refer to it as the ‘Blue Planet,’ and understand the importance this series has for both educational and entertainment purposes.

Of course, similar to the work of UX designers, creating Blue Planet II required hours upon hours of strategy, journey crafting, and production. In fact, the experience that each viewer will have at some point in time while watching is partially influenced by the people who were behind the camera. As BBC News reports, “Blue Planet II involved ‘125 shoots, 6,000 hours filming underwater and 1,000 hours filming in submersibles’, explains production manager Katie Hall.” We must also not forget how advanced the filming techniques are in order to allow viewers to have a truly transformational  experience with the footage. The team even built new technology allowing viewers to see the ocean in a way that’s not possible on their own (unless they happen to have their own megadome lens or tow-cam). This is special. And we feel strongly that people will value the design and creativity of the final product. Where else can we see above and below the ocean’s surface at the same time? Where else can we swim full speed with wild tuna or a pod of dolphins? Thanks to Blue Planet II, our brains will be hard at work, saving information, painting pictures and recording an experience that will likely serve as the basis for which we “see” the world’s oceans.

It’s true. We can’t wait to tune in. Will you join us?